After a brief overview of historical approaches to conservation, Jonathan will
highlight some of the conservation dilemmas from his perspective as a botanist and
ecologist, rather than that of a zoologist.

The talk will focus on three main issues:
1. Should we focus on the conservation of individual species, or focus primarily
on helping conserve habitats and vegetation?
2. Should conservation be mostly site-based, or focus more on whole
landscapes?
3. What is the conservation significance of rewilding and what is the role for just
allowing nature to run its course, albeit with some occasional guidance and
nudging?

After Jonathan has described the issues, with particular reference to sub-Saharan
Africa, we want to encourage an open debate, and to hear your opinions on the
various topics raised.

Jonathan has lived and worked as a botanist and ecologist in a number of countries in southern Africa over the last 40 years, including Botswana, Mozambique and Zimbabwe, as well as being involved in numerous projects in Malawi and Zambia. For many years, he was Editor of Flora Zambesiaca, the regional flora for south-central Africa (including Malawi), based in the Herbarium at the Royal Botanic Gardens Kew.

It should be a lively event!

The Union Jack Club is in Sandell St, directly opposite the Waterloo Station ticket hall for the Jubilee underground line. Cross Waterloo Rd at the traffic lights and Sandell St is 10m to your left. The club entrance is 15m down Sandell St on the right. Depending on availability, you can book a table in the restaurant (open 17.00-21.30) or accommodation for the night. For the restaurant, ring 020 7902 6062 . 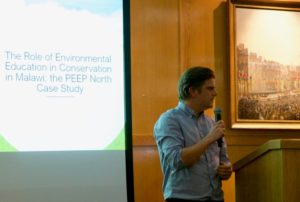 Who better to talk at our autumn event than Jonny Vaughan, CEO of the Lilongwe Wildlife Trust (LWT), who run the environmental education programme for the Nyika Plateau and Vwaza Marsh? He knows, more than anyone, the possibilities and challenges of conservation in the north of Malawi, though he is always quick to credit his very able team.

There has been huge growth in environmental understanding, but Jonny posed the question of whether it has made any difference? It seems that Malawi has seen significant deforestation and a decline in fish stocks since Dioum’s inspirational words, so do we need to reach more people or do things differently? Climate change is adding to the woes, with animals bereft of habitat, water and food forced to eat community crops to satisfy their hunger. No wonder then that human-wildlife conflict exists.

LWT started in 2007 as an animal sanctuary and is now a registered trust in both Malawi and the UK with around 115 staff with a mission to “Safeguard Malawi’s wildlife and empower guardians of the wild”. The environmental education programme, part funded by NVT UK, aims to create the next generation of conservationists. To do that, the subject needs to be included in mainstream formal education. That is starting to happen, but it is slow and remains an aspiration and LWT wants learning to take place outside the classroom and to give people direct experience of wildlife.

You may have read the impressive statistics of numbers of people sensitised (made aware) to the impact of wild life crime in previous newsletters, and Jonny was able to add a whole rich layer of meaning. We are in stage 2 of the programme and the difference in this stage is a significant increase in the number of individuals and adults interacting with nature. This harks back to Dioum’s quote about the importance of understanding. The transition is to a more holistic approach of education and prevention. Shifting from issues-led campaigns to behaviour change has meant working at high level with government officials and magistrates in Malawi. The law has been strengthened, with the National Parks and Wildlife Act resulting in the more serious wildlife crimes carrying prison sentences of up to 30 years. Since the act there have been 383 wildlife crime arrests and 1623 kg of ivory have been seized. This has been achieved by institutional change, not just change at poacher level. It takes serious skills to poach an elephant and these are only found by adding the know-how of organised groups to the local knowledge of the hands-on poacher.

Hearing Jonny talk about what has been achieved was very encouraging and to hear about what might still be done was inspirational. His leadership in this field has been recognised when he was awarded an MBE in April 2019. It was pleasing to see many young people in the audience who have either already been to Malawi or now wish to go there and do their bit to become guardians of the wild by helping more people to understand.

Juliet Cornelius-Rumsey will once again be running in the London Marathon to raise funds for NVT.

Juliet was born in Malawi and has a passion for this wonderful African country and would appreciate your support.

Crowdfunding to Help raise funds for the Nyika-Vwaza (UK) Trust. A Charity working for the environmental and wildlife conservation in Northern Malawi. on JustGiving

We are delighted to announce that NVT are seeking applications for research grants. Full details are given in the following link NVT Research Research Grants

We have just updated the Nyika and Vwaza Marsh Bibliography. We hope you will find this useful.

If you are aware of additional material that you think should be included please let us know. 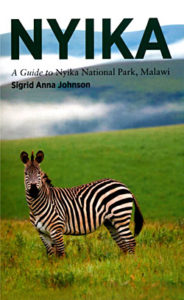