The Nyika National Park lies on the eastern arm of Africa’s Great Rift Valley. The Nyika high plateau is the result of millennia of uplift from tectonic plate movements. Even today there are yearly occurrences of violent earth tremors that sweep across the plateau. 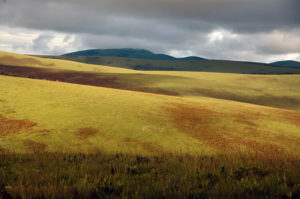 Where is the Nyika plateau? 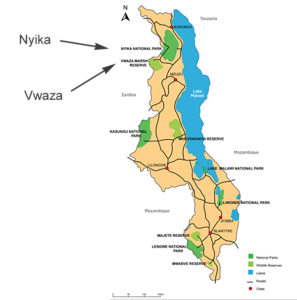 To see a Detailed map of Nyika please click here

The Nyika was Malawi’s first national park and was established in 1965. It is the largest of Malawi’s five national parks and now covers 3,000 km² (300,000 hectares). It is one of central Africa’s most beautiful montane plateaux.

The Nyika National Park is located astride the Malawi/Zambia border to the north west of Lake Malawi. Most of the plateau is in Malawi but with a small western section (about 70 km²) in Zambia. It is part of a chain of montane massifs running parallel with the Indian Ocean coast from Ethiopia to the north to South Africa, which form a series of “biological islands” across the continent supporting a high species diversity with many endemics. 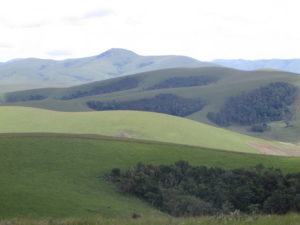 The Nyika massif is an extensive high altitude plateau covering 3,134 km² ranging in altitude from 2440 m in the west to 2135 m in the east. The lowest point, along the Ruwile River in the northeast, is at 582 m while the highest peak (Nganda) is at 2606 m. On the gently undulating plateau surface, ridges alternate with wide, deep and level valleys with poorly drained marshy floors partially filled with peat and other sediments. Geologically, the massif is a massive upfolded block of intruded granite and granitic gneiss and forms the western margin of the East African Rift Valley system. Most rocks found are intermediate to acidic in character, giving uniformity in soil type and vegetation. Soils are rather poor and acidic. 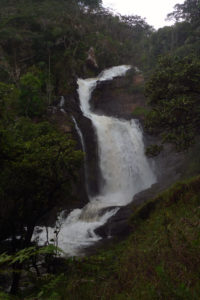 Draining the Nyika plateau the main perennial rivers are the North Rumphi, Chilinda (Rumphi), Runyina and North Rukuru. Originating from broad grass-covered dambos on the plateau, they have cut wide and deep valleys. There is only one natural lake on the plateau, Lake Kaulime near Chilinda, formed by a landslide which blocked one of the headwaters of the North Rukuru.

Mean annual temperatures are around 13-15ºC with a low number of frost days ( around 7) per year at 2300 m. The warmest months are October and November, which mark the start of the single rainy season lasting from November to April. The rains are followed by spells of mist, drizzle and sporadic showers in the winter months of May to mid-August. Mean annual rainfall varies from 1000-1200 mm on the central plateau to around 1700 mm at the top of the eastern escarpment, with even lower figures in the north. The dry period is about 6-7 months, although soil moisture storage is very good and streams run all year. Seasonal distribution and abundance of rainfall can vary greatly from year to year.

The oldest dated records of human occupation of the Nyika Plateau are placed at around 3500 years ago. A European missionary, Reverend James Henderson, travelling through the Nyika Plateau area between 1895 and 1899 found it thinly peopled by members of the Phoka, a subgroup of the Tumbuka. However, the Phoka never permanently inhabited the area above 2000 m. They practised very little cropping and kept a small number of goats and sheep. Iron smelting was an important economic activity which had been going on for 2000 years.

In 1902 John McClounie made the earliest recommendation for the conservation of the Nyika Plateau. In his report he recommended that the Nyika Plateau be placed under protection and developed as a sanatorium for white settlers due to its temperate climate and the total absence of malaria-carrying mosquitoes. However it was not until 1948 that official action began to be taken when a relic patch of Juniperus procera forest, the most southerly stand of this tree in Africa, was proclaimed a forest reserve. Later on, in 1951, the entire plateau was declared a no-hunting zone. In 1965, shortly after Malawian independence, the Nyika plateau was gazetted as a national park, being expanded from 940 km2 to 3134 km2 in 1978. It now includes the plateau surface, all the escarpments and most of the north-east and southern hill zones. This expansion in 1978 resulted in the destruction of some 10,000 Phoka dwellings and the removal of people from the park. A management plan developed in 1975/76 proposed that the park be zoned into five land-use classes, but this was not implemented at the time. At present staff levels and resources are below that required to implement it. 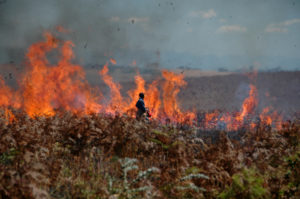 Although burning is used as a management tool, the greatest threat to the vegetation is wildfire originating inside and outside the park. Protection of the remaining forest patches from these annual burns is critical. Wildlife poaching, especially in the dry season, and poaching of edible orchid tubers, is a major problem. Another significant problem is invasion of grassland by indigenous plants such as bracken and alien invasive species such as pine and Himalayan raspberry. The present policy is to get rid of alien elements introduced when the Forest Department established a number of trial plots of exotic conifers and eucalypts in 1964. The Department of National Parks and Wildlife has a permanent wildlife research officer based in the park and a general monitoring and maintenance programme. There is an office with minimal equipment and reference books. 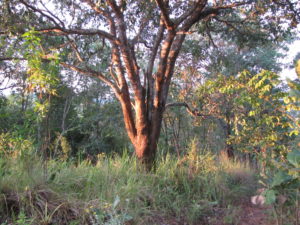 As regards vegetation, the Nyika Plateau is perhaps the largest montane complex in south-central Africa. It covers some 1800 km² above the 1800 m contour, the altitude that generally marks the transition between the miombo woodlands (characterised by dominance of trees in the genera Brachystegia, Isoberlinia and Julbernardia) that occupy the lower lying slopes and plains, and the forests and grasslands of the higher montane region. 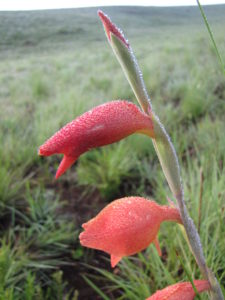 In the grasslands the main species are tufted grasses, commonly referred to as ‘short grasses’ though often 0.5-1.5 m tall. Between 2200 and 2500 m the central plateau (about 60% of the montane area) consists of rolling Loudetia‒Andropogon grassland with scattered patches of low forest accounting for less than 3% of the area. Over 1800 m altitude 90% of the plateau is covered by short open grassland dominated by Loudetia simplex, Themeda triandra and Exotheca abyssinica. Themeda predominates on fertile soils while on poorer soils Monocymbium cerisiiforme and Festuca schimperiana occur in quantity. 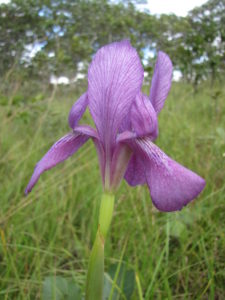 There are many species of flowering plants. Streams and margins of the swamps are often bordered by the shrub Phillipia benguelensis, while the dambos are occupied by a rich herbaceous flora dominated by species of the Cyperaceae family. At the edges of moist drainage-ways bracken fern (Pteridium aquilinum), heaths (Blaeria patula, B. kewensis) and other low shrubs are found. Pteridium is also common on disturbed soil. 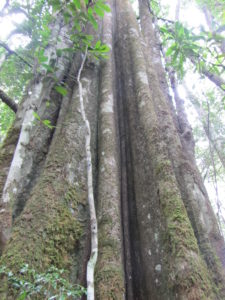 The forests on the Nyika are of two types, sub-montane rainforest and montane (Afromontane) forest. Sub-montane forests have a higher canopy, more complex structure (e.g. emergent buttressed trees, large number of woody climbers) and occur at lower altitudes. Their canopy is mostly continuous and the ground cover is often no more than a few herbs and ferns in a carpet of dead leaves. Numerous patches cover the southern and south-western slopes at 1950-2200 m. The limit between sub-montane and montane forest lies at about 2300 m on the eastern escarpment and 2250 m in the west. The most extensive block of montane forest on the Nyika massif is found on the very steep slopes of the eastern escarpment, extending for about 28 km and totalling a few hundred hectares. Another important block of 600 ha lies on the north side of the North Rumphi stream. The edges of montane forest patches above 2250 m are usually abrupt owing to fire with little secondary growth fringing them. At lower altitudes secondary growth forms larger patches around the forest, covering of many hectares at 2000-2100 m.

At the top of the escarpment at 2050 m Brachystegia woodland is found on the drier western slopes. In the north the plateau drops into dry broken wooded country from 2300 to 1600-1700 m. The 10 ha Juniper forest (10°45’S, 33°55’E), here at the southernmost limit of its continental range, is characterised by large, tall trees, decaying logs, deep leaf litter, bryophytes and climbers. 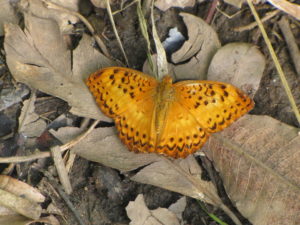 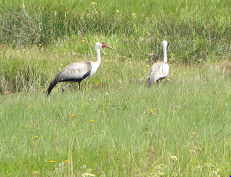 There is a rich and diversified fauna found in the grasslands and forests, with several sub-species of reptiles, amphibians and butterflies endemic to the area. 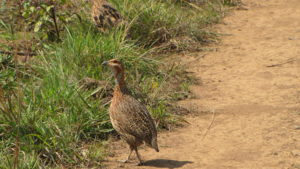 Over 400 species of bird have been recorded from the Nyika Plateau, both in the montane forest patches and the surrounding grassland, and have a distinctly East African feel, this being the southern limit of distribution for many of them. 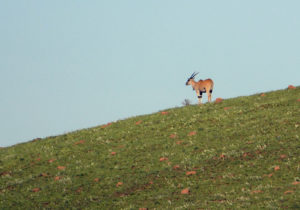 Mammal species recorded in the park include leopard, lion, spotted hyena, side-striped jackal, samango and vervet monkeys, zebra, warthog, reedbuck, bushbuck, greater kudu, eland, common duiker, roan antelope, red duiker, Lichtenstein’s hartebeest, klipspringer and puku (only as vagrants). Fewer than 50 elephants have been recorded in the park at any one time. Their numbers are decreasing and they are confined the low altitude areas in the north. 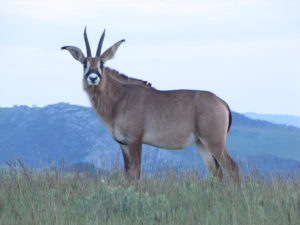 Subsistence poaching from neighbouring areas threatens several of the less common mammal species, and while animal populations in the immediate vicinity of Chilinda are stable, fewer large mammals are recorded on the edges of the plateau.

The upper South Rukuru contains several fish such as Barbus and Clarias species which do not occur elsewhere in rivers flowing into Lake Malawi. Four major streams (Chilinda, Rumphi, Runyina and North Rukuru) and three dams near Chilinda have been stocked with rainbow trout.